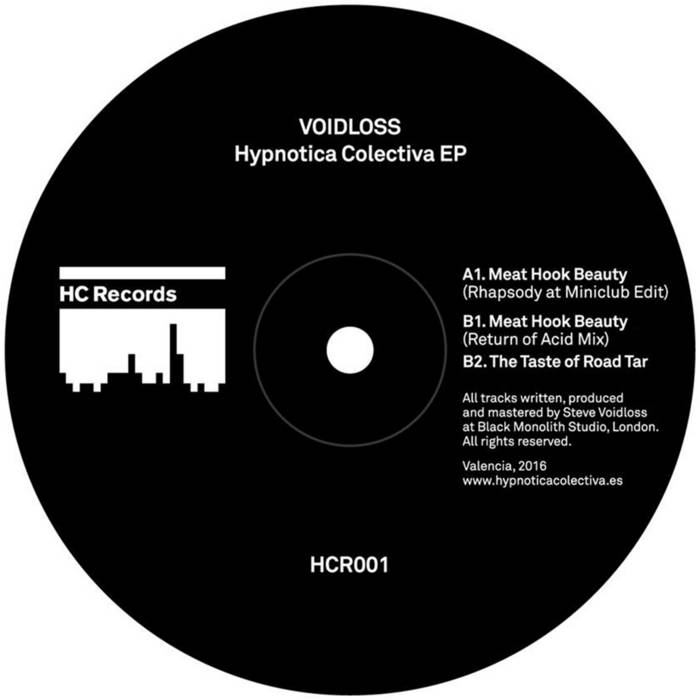 The work of Steve Voidloss always showed us a particular vision, filled with sentiment, that emerged as direct influence for a dark, violent techno. A music charged with emotions, beauty, and mysticism that we love.

In 2009 "Labrynth Records" released "The Sinister Dialect EP", which featured "Meat Hook", a masterpiece that rapidly became a historic anthem for Hypnotica Colectiva. When we finally had Voidloss performing in Valencia, the climax arrived in that magic moment when Voidloss performed "Meat Hook". It wasn't the original studio version, but a extended one for the live PA, stronger, higly emotional, named "Meat Hook Beauty - Rhapsody at Miniclub Edit".

We started a big friendship with Steve, so more performances followed after. In every occasion Steve delivered a new live act with new music. But always revisitating "Meat Hook Beauty" in the peak time of the night.
Time has come to start our very own record label, a project that will reflect what Hypnotica Colectiva has been. And there isn't a better way for this than to make our debut with Steve Voidloss and the magic of "Meat Hook Beauty", plus it's "Return of Acid Mix". "The Taste of Road Tar", a new killer techno cut completes the EP.

This is HCR001, the beginning of Hypnotica Colectiva Records.

Dan D: “Superb release from the always mighty Voidloss! Congratulations to Hypnotica Colectiva on kicking off the label, a fantastic start. Thank you!”

Synthek: “The taste of Road Tar for me, tnx”

Datura Dilema: “The taste of Road Tar is just Fantastic!”

Sicco Bosscher: “Congratulations with the birth of your new label guys
and what a way to start.”

Leandro Gámez: “"The taste of road Tar" it's a fantastic track.”

Corvum: “Great release by Voidloss on Hypnotica Colectiva Records! Old school real groovy and solid techno tunes with some moments of cinematographic melodic progression! Well done! My favorite the extraordinary ''Meat Hook Beauty (Rhapsody at Miniclub Edit) ''. I will definitely play it and of course you will have my support! Thank you!”

David Reina: “FULL SUPPORT! All the best with the label and thanks for the music.”

Bandcamp Daily  your guide to the world of Bandcamp

Featured sounds from Fly Lo and Ahmed Idris, plus Mother Nature hops on to drop off new project